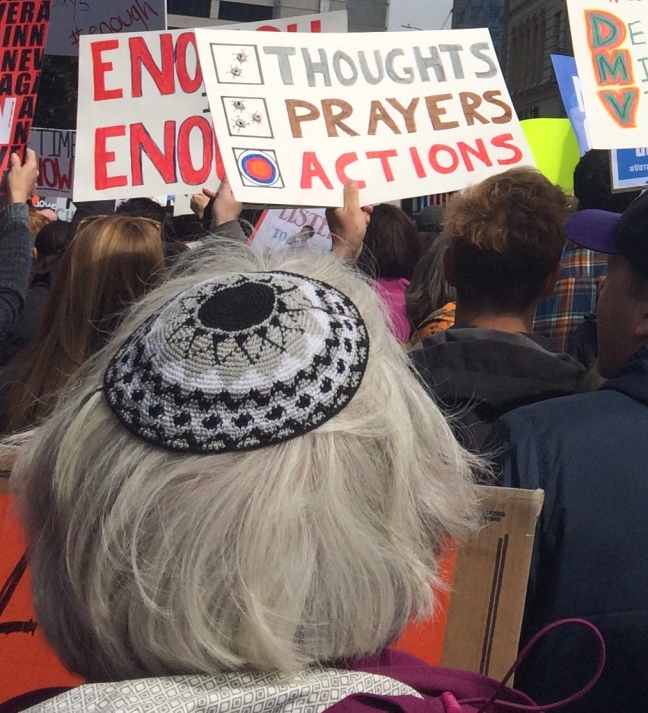 Almost exactly a year ago, I had the honor of being invited to speak as the sole clergy voice at the second Women’s March in San Francisco.  That moment, and others like it since the fall of 2016, gave millions of us nationwide strength, inspiration and the joyful power of collective action to fuel a transformational 2018 election.

Backstage that day, I met Zahra Billoo, the Executive Director of the Center for American Islamic Relations- SF Bay Area, who spoke right before me.  As we embraced on the podium before tens of thousands, she in her hijab, me in my tallit and pussyhat, we were not just two people in that moment.  We were, in that embrace, embodying a symbolic aspiration that is powerful and important that I gave voice to in my opening words:

“There are those who would prefer to divide us, race by race, religion by religion – but we are not going to let that happen!  We are here to celebrate and strengthen one another in all of our beautiful diversity!”

Even then, some voices in the Jewish community were objecting.  After the march, rather than write about how a rabbi was the only religious speaker at the SF March, our local Jewish newspaper instead published a piece from a woman who attended the march in Oakland and complained (probably rightly) that the speakers singled out Israel for critique and made many Jews feel unwelcome.  Falling into a familiar media trap, our local Jewish press amplified the drama of negativity and conflict and ignored a joyful positive moment of good news. Instead of lifting up a story about positive Jewish leadership in a multi-cultural movement, the story of Jews being “othered” was given far more attention.

Now, in the weeks leading up to the 3rd Women’s March, waves of critique batter the national leaders and demand that Jews and their allies boycott the marches.  In NYC and other cities, simultaneous separate marches will ask demonstrators to choose between marches that align with the original Women’s March or marches that emphasize welcoming Jewish women.

Meanwhile, the official statements of the Women’s March nationally and locally condemn Antisemitism and hatred in all of its forms.  Linda Sarsour, one of the organizers for the national Women’s March who has been accused of Antisemitism, has written an eloquent piece denouncing Antisemitism and apologizing for a slow and clumsy response.    Yet many are still deeply disappointed in Tamika Mallory, one of the top leaders, for failing to properly denounce Louis Farrakhan. Stories circulate about how one of the original organizers, a white Jewish woman, was pushed out of leadership after the first march.

So what is a white Jewish rabbi to do?  Despite the mess, I’m glad I didn’t sit it out last year and I don’t plan to sit it out this year – for reasons both selfish and strategic, practical and principled.

The stakes in this moment are as high as they have ever been in my lifetime.  After the 2016 election, I awoke to realize that the basic institutions of American Democracy I have taken for granted will not automatically continue.  If we do not activate citizen participation, if we do not stand together with allies who believe in the rights and freedoms that are the bedrock of our nation, then even America could fall into the kind of authoritarian nightmare that is now sweeping many once-liberal Democracies world-wide.

This is not the time for the Left to splinter itself over the purity of our identity politics.

And yes.  I am disappointed in Tamika Mallory and others like her.  I am angry to see Antisemitism on the Left that is real and that we have ignored for far too long.

I also am pained to admit that there is real racism within some Jewish communities.  I am ashamed to see prominent Jewish leaders champion some of the worst xenophobic rhetoric and policies spewing from the Trump White House.  I am heart-broken that the State of Israel falls so far short of my own Jewish ideals for justice as it creates untold suffering for so many Palestinians.  Without excusing them, I can understand why some of our allies might have swallowed anti-Semitic poison in the absence of real cross-cultural relationships.

AND — I do not believe that the way to heal these problems is to walk away from the table of diversity and solidarity back to our tribal groups and shout accusations from the other side of the room.

The Women’s March is not best defined by the politics of a small leadership circle.  The Women’s March is part of a worldwide movement for the liberation of all human beings with women at the forefront.  Boycotting the entire enterprise is self-defeating, short-sighted and unlikely to change the problem.

Jewish ideas and voices have a lot to offer in the struggle for justice, from the template of the Exodus in the Torah and our long tradition of critical thought, to the historical experiences of oppression and struggles against it, to the power we do hold in today’s context of relative Jewish acceptance.  The movement will suffer if we are not at the table.

AND – for our own sake, selfishly, if we want to protect the rights and well being of our own tiny group, the best way is to stand in coalition with others and lift up the rights and freedoms of the most vulnerable among us.

Ultimately, hanging in there with our imperfect partners is a smarter strategy than letting our own justifiable feelings of hurt break our bonds.  If we want Tamika Malory and others like her to face and transform Antisemitism, it will not happen through public shaming.  It will happen through hard, loving, long-term relationships where all parties hold one another accountable even as we stay connected.

I was proud to speak at last year’s Women’s March in SF.  I am proud to march tomorrow.  I have faith in the ability of my sisters to grow and embrace a more loving and open-minded approach, and until they do, I refuse to believe that I must choose between my Jewish and Feminist loyalties.  I hope to see you there and may our presence strengthen a movement for freedom and justice that can transcend and overpower the forces that would seek to divide us.

We, readers of Torah in 2019, jump in and out of the Exodus story in different moments, ourselves becoming different characters:

an Israelite slave, toiling in despair,

a reluctant prophet, trembling and amazed by the call of a fire that burns without destroying…

Lately, we all know what it is to live through plagues. The plague of gun violence. The plague of corruption. Rising seas and super storms.  The pestilence of xenophobia. The darkness of spreading normalized lies, manipulated masses turning away from the light of Truth.

From inside the story, no one knew when, or IF the Happy Ending would come. Living through plagues was just terrifying and painful. Birth-pang, rock bottom suffering, increasing till no one left could stay asleep.

And then the moment came. And everyone got clear — from the prisoner in the pit to Pharaoh up on high — it was time for change.

By then the people were ready. Ready to sprint. Before Pharaoh’s heart could spasm itself shut again.

And they ran. To the edge of the impossible sea. And then God met them with an impossible unexpected miracle.

The sages ask — when did they sing and dance? Was it after they were safely across? Or was it AS they crossed, still not knowing, chariots behind them, walls of water around them? Did they, Could they, dance through the uncertainty of the sea?

If there is any trace of Miriam within me, I ask her, and she tells me…

They sang and they danced along the way. They did not wait for joy. They did not wait for some assurance of security first. Even before they crossed — AS they crossed. Right there in the middle of the story, before that Happy Ending. Even while they were on their way and it was still dangerous and they still didn’t know it would all turn out alright, and they still had a long long way to go – there in the middle of the struggle – they sang and they danced and were free…